Now that I'm on the hunt for picture books for the older set, this caught my eye.. 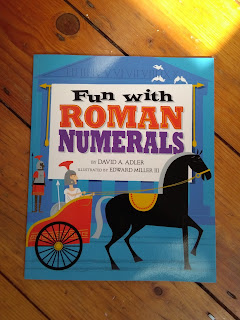 Fun with Roman Numerals
I don't think my kids will be overjoyed to see it but I do think they will be interested. And it is interesting! Surely knowing roman numerals is a useful skill to have? And maybe if I try to fill their heads with useful knowledge, it will squeeze out some of the Pokemon rubbish currently residing there.
P.S. We read this last night and it was excellent. A crystal clear explanation that left us all fluent.
Posted by Lucy Mitchell at 09:34 No comments: 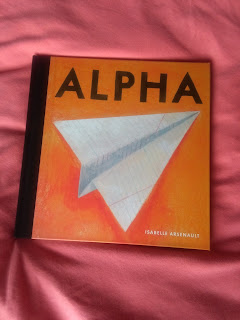 The funny thing about alphabet books is that they are traditionally for babies and toddlers, who are years away from wanting or needing to know about their A, B, C's. And then if you do look at them with school age kids, the font will be different to what they are learning at school or the words used to illustrate the letters aren't phonetic or the C isn't a hard one. They do not work as a teaching tool. But that doesn't mean they can't be a fantastic read. I definitely have a soft spot for alphabet books, which is lucky as every illustrator who is popular at all seems to do one. My favourite is Paul Thurlby's Alphabet. I have two copies, one on the shelf and one on the wall facing my younger three boys beds.

I know, you could say they will grow out of it, but I don't care. It's just beautiful art and hopefully they will never grow out of that. Bruno Munari's ABC is one I have often wanted to get but never did and Alpha is my latest purchase. The excuse I used to get it was that it was for older kids insofar as each letter is written using the NATO phonetic alphabet. You know, Alpha, Bravo, Charlie, with each illustrated so, so beautifully. I do love it but have a feeling it could be a bit too aimed at hipster parents. Its dangerously cool, to be honest. However, it is quite fun going through it and seeing which letters we know and which we don't and It would be FANTASTIC pasted onto boards like the one pictured above. The letters are opposite the illustrations though, (fifty two pages!) so you would need a very big bedroom. 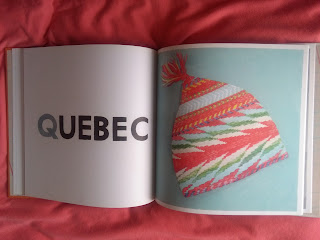 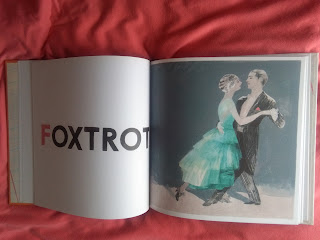 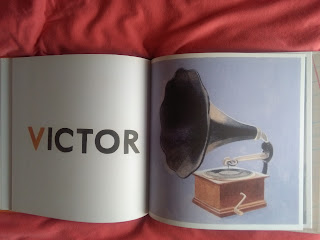 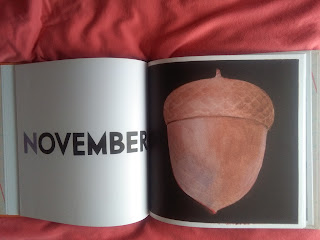 Posted by Lucy Mitchell at 06:17 No comments:

I'm hosting my book club this month, so I get to pick our next read. So, I haven't read this yet but I'm really not sure if I can wait until our meeting. I know, you can't tell a book by its cover, but if you could, this one would be great, right? 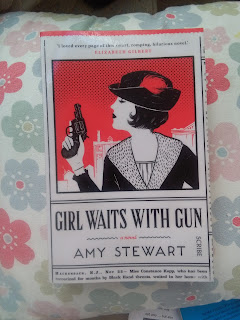 Posted by Lucy Mitchell at 04:30 No comments:

Detectives in Togas by Henry Winterfield 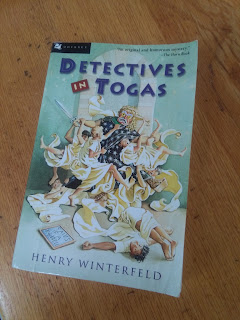 This is one of those books that I really want my boys to read. Written (originally in German) in 1956, set in Roman times, full of good clean fun and absolutely NO SCREENS. So needless to say, when I purchased it for our holidays I was not feeling very hopeful. I've bought quite a few cloth bound beautifully reproduced classics that got rave reviews on Amazon from people who read them as kids to have them tried and swiftly rejected by my boys. Anyhoo, they all read and loved this one. Ideally for aged eight and up, Dectectives in Togas would be a great addition to any classroom library. Mystery of the Roman Ransom by the same author looks good too.

Posted by Lucy Mitchell at 06:51 No comments: 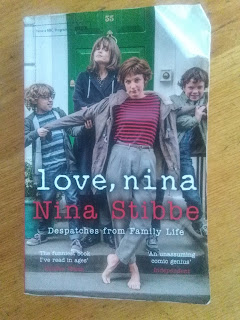 I read this when we were camping earlier this month. I remember starting it on the ferry from Cork and thinking great, my holidays have begun. I LOVED it. It's just letters, all from Nina, to her sister Vic, but they are wonderful. I spent a summer in London in the late eighties so there is some nostalgia for me but my son, who wasn't born until 2001 loved it too. He read it twice. Usually when we camp I read a book and leave it a common area on the site. But this one came home as I am sure I'll read it again.
Posted by Lucy Mitchell at 10:46 No comments:

An Egg is Quiet by Dianna Hutts Aston and Sylvia Long

The party invitations for my Junior Infant(he's five) are usually joint ones - so we get one present and it is added to a black sack of gifts to be divided between the birthday boys. I spend between twelve and fifteen euros and if I'm organised, get books. (And if I'm not I wander around the Tiger and Tesco beside the party venue wishing I'd bought books.) Anyway, these arrived this morning in time for the party next week. I've already reviewed Petunia here - its perfect, and its my first time getting one of this lovely series. Its not my last though, I'll definitely be getting one or two more for our camping holiday. 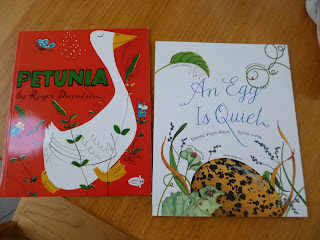 An Egg is Quiet is great. Its one of those non fiction books that we all love - there's beautiful illustrations and its so interesting! If you liked Feathers, Not Just For Flying, you'll love this. If you liked Bird Bingo, you'll love this. Its just 36 pages about eggs - their colours and shapes and how they are cared for by their parents. It would have been a great addition to an Easter basket. I think I'll get A Rock is Lively next. Or maybe A Seed is Sleepy? 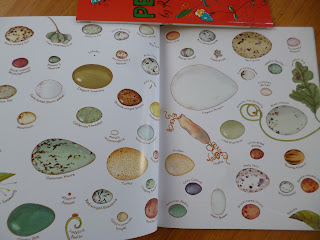 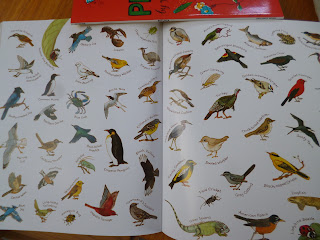 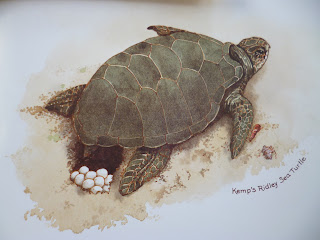 Kemp's Ridley Sea Turtle buries its eggs beneath the sand. 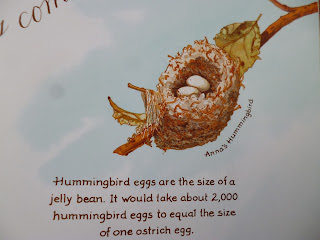 Hummingbird eggs are the size of a jelly bean.

Goldilocks and the Three Bears by Lauren Child, Polly Borland and Emily Jenkins 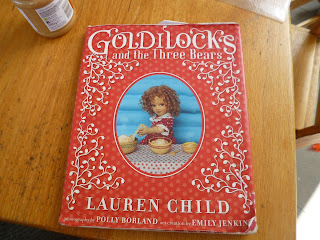 Goldilocks and the Three Bears (this link brings you to the paperback. It looks like the hardcover is out of print.)
This caught my eye in the library yesterday. I had been reading about the Lonely Doll series, so books with photographed dolls were in my mind. I have never seen that series in real life so cannot accurately give an opinion but images I have seen give me the idea they are magical insofar as kids who have given their dollies real lives can actually see this in photographs, but the pictures can also look a bit creepy. They were, in fairness, first published in 1957. Anyway,  I thought this twenty first century take on the idea would be worth a look.

My five year and I LOVED it. The sets are designed by Emily Jenkins, photographs by Polly Borland and of course, the words are by Lauren Child. 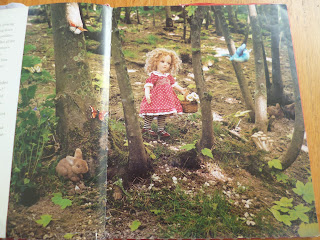 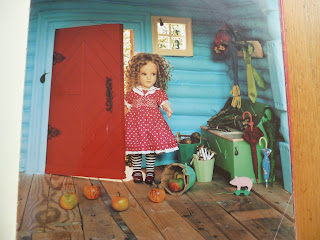 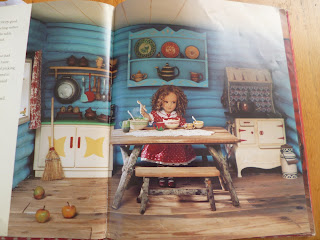 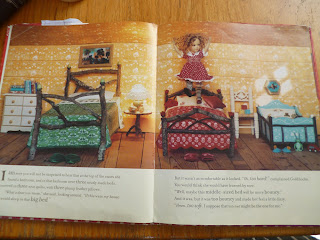 And as a bonus, very pretty title page. 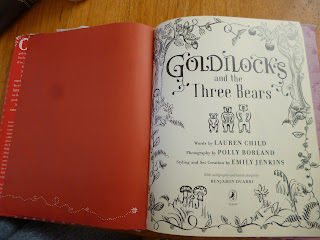 Calligraphy and textile design are by Benjamin Duarri.

Hi, I'm Lucy. I live in Dublin, Ireland with my husband and four sons, now four, nine, eleven and thirteen. I have written for newspapers and magazines and my children's novel The King and I and the Rest of the Class was published in 1997. Anyway, all that was before I had kids. Now I talk about writing again but really I mostly read. To myself and to my boys. And any book we really like gets a mention in this blog. Sometimes (not often enough) I get sent free books, but sadly, I only write about them if we love them.